Now that December is well underway, I don’t seem to be able to go into any shop or cafe without getting a good lungful of the scent I have come to associate with Christmas.

Cinnamon and ginger are everywhere at Christmas.

These spices, which are both now widely available in supermarkets, were originally of exotic origin, brought to Europe via overland camel trains with the traders crating a shroud of mystery around their origins.

Ginger can be grown in the UK. The method of cultivation is to plant rootstalk cuttings, which has been going on for so long now, that the flowers do not go to seed. It is the rhizome (root) of the plant that is used in cooking for its taste and pungent aroma.

Why not try baking some Christmas gingerbread, or the traditional German version, Lebkuchen?  There are recipes in the Read More section below. 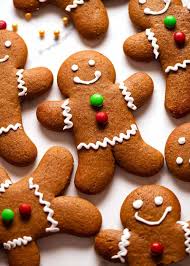 Cinnamon is originally from Sri Lanka, India and Myanmar and just like a Christmas tree, the cinnamon tree is an evergreen.  It is the dried inner bark and the leaves that are used for spice production, with cinnamon sticks being rolled sections of the bark.  At one time, the spice was more valuable than gold and became the most profitable commodity for  The Dutch East India Company.

At this time of year, we often find cinnamon mixed into various recipes, but an all time favourite has to be adding it to hot chocolate for an extra dash of Christmas indulgence! Again, there’s a sneaky recipe at the bottom of the page!