On 15th January 2022, submarine volcano Hunga Tonga–Hunga Haʻapai erupted, triggering tsunami alerts across the South Pacific Ocean, with countries such as Japan and the USA (Hawaii) advising their residents to stay away from the shore and move to higher ground. 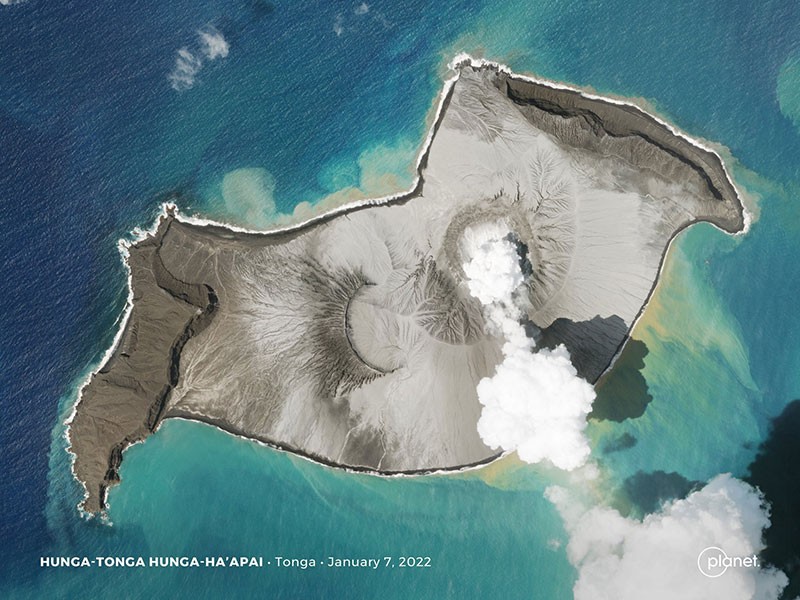 The picture shows Hunga Tonga–Hunga Haʻapai, the volcanic island, before the eruption.

The tidal wave that did strike, hit the Island of Tonga, whose capital is just 40 miles South of the volcanic eruption site, leaving devastation in its wake.

International aid was only able to start arriving on Tonga on 20th January, because before that date, the smoke and ash which came billowing out of the volcano proved to be too dangerous for aeroplanes to fly.

At it’s highest point, the volcanic island of Hunga Tonga–Hunga Haʻapai is about 100m above sea level, but under the water lies a volcano, about 1800m tall and 20km wide, which has regularly erupted, sending streams of hot gases and magma through the waves as recently as 2015.  It seems as though this month’s event was much more powerful as the magma was blasted through the water, full of volcanic gases, giving the eruption significantly more power.

Volcanoes form at the boundaries of tectonic plates, and are an opening in the Earth’s crust, allowing the magma from the mantle layer of the Earth to escape.

It will take many years for the devastation of the tsunami and its after-effects to be overcome.  The BBC news link below has pictures showing scenes on teh island before and after the Tsunami struck.

It is thought the preparedness of the island nation for natural disasters has limited the death toll.  Tonga ranks second only to Vanuatu, (another island) in its vulnerability to natural disasters and so has plans and procedures in place for just this type of event occurring.

Until next time, keep calm and apply some Science.